The Age Perks system offers a selection of physical, clout, and wisdom bonuses for each year of your wolf's life.
Updated on May 9, 2022

The perks of age change dramatically over the course of a wolf's life. Young wolves are bursting with vim and vigor.  Elder wolves have lost that youthful prowess but gain wisdom and insight into the ways of the world.

In WolfQuest, your wolf can enjoy those perks too. The Age Perks system offers a selection of physical, clout, and wisdom bonuses for each year of your wolf's life.  Once a year, you have the option to advance your wolf in age by one year and select from a new set of perks.

On your birthday (in April, just before your pups are born), you will be presented with the Age Perks menu, where you can view all of the Age Perks available at each age. You can select up to three new Age Perks if you wish to advance to the next age. This choice only presents itself once per year, so be sure to think carefully about your decision. 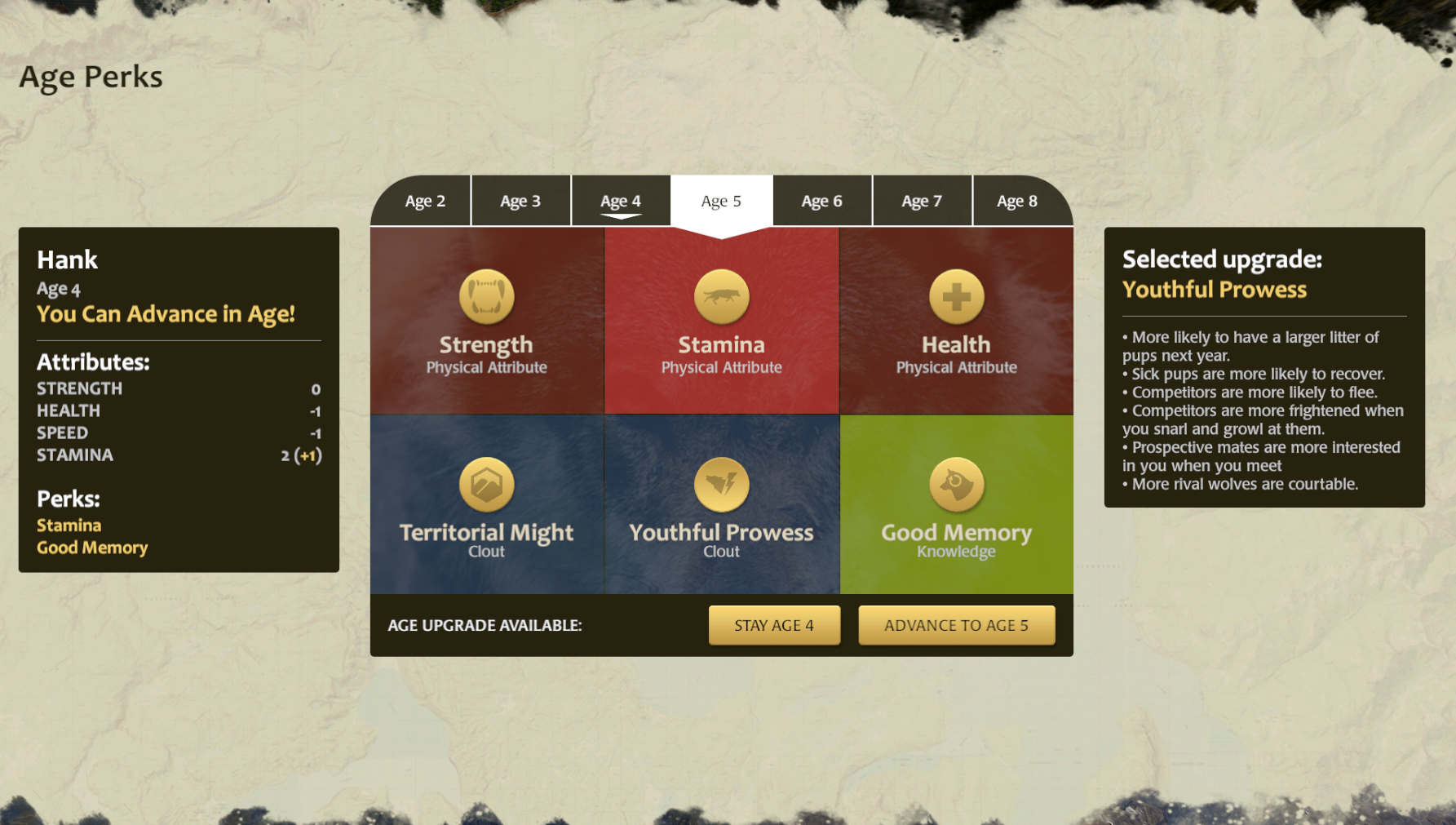 Only one age's worth of Perks are active at any one time. Your wolf only gains the benefits from the Age Perks you've selected for your current age. If you choose to advance in age, you lose access to the previous Age's Perks in favor of the Perks you select from the next age.

Strength: Do more damage when attacking prey and competitors.

Stamina: Boost your maximum stamina by 10%.

At age of seven, on your next birthday, you can choose to advance to age eight and become an Elder Wolf. This is a distinct age from the others, since eight is old for a wolf! Many wolves don't live this long, and those that do certainly can't expect to live much longer.

Remember, if you choose to advance to age eight, your wolf will die at some point from a variety of causes. If you do not wish to finish your wolf's life story, don't advance to this age! You can always remain at one of the previous ages if you wish to keep playing with a given wolf.

If you advance to age eight: Elder Wolf

Fate of Mate and Pups of an Elder Wolf:

You may have saved games from the years before your wolf became an Elder Wolf. If you load one of those, you will activate Reminisce mode. This lets you relive your wolf's younger days (though with your Age 8 Perks), revisiting your old mates and pups -- but you cannot save your game.

How do I age up after completing Slough Creek?

Once you have completed the Slough Creek quests and reached Endless Summer, you can then start a new year in the life of your wolf and have a new litter of pups. In the main menu, start a new game and go to Amethyst Mountain (if you want to find a new mate) or Slough Creek (by choosing an existing mate). Once back in Slough Creek, after establishing a territory and finding a den, you will have the opportunity to advance in age on your birthday -- right before your new litter is born.

What is the difference between Elder Wolf and Ironwolf?

Elder Wolf is very similar to Ironwolf: You can have only one save, and death is permanent. Your wolf becomes an Elder Wolf when you advance to age eight (rather than when creating a wolf and making it an ironwolf).

Will my mate age up too? Do mates get Age Perks too?

What if my mate is older than me? Do they become and Elder Wolf at age eight? Can they die first?

When your mate reaches age eight (regardless of your age), they will become an Elder Wolf, and at some point will die in their sleep. You'll also have the option to enable Mate Permadeath so other dangers can kill them during gameplay, but that is completely optional.

Will my wolf's appearance change as I age?

The coats of real wolves do change as they age. Unfortunately, this does not occur in the game, due to technical and aesthetic challenges. We would like to add it at some point in the future.

Can I age up in multiplayer?

No, you can only age up in single player. But if you play with a wolf that has certain Age Perks, they may benefit your wolf while playing in multiplayer. See  Age Perks descriptions above for specifics.

Can I play an Elder Wolf in multiplayer?

No. Elder wolves (age eight) are on their final journey and can only be played in single player.

How did WolfQuest choose the causes of death?

We reviewed the many ways that Yellowstone wolves have died over the past 25 years and chose a representative selection.

Can't find what you're looking for? Get in touch
Thanks for your message!
We really appreciate your feedback and will get back to you as soon as possible.
×