With your pups coming, you first need to establish a territory to help keep your family pack safe.
Updated on January 3, 2021

Upon arriving in Slough Creek, you must begin preparing for pups. The first step is to establish enough territory to reduce the threat to your future den site.

To establish your new territory, you must claim at least 15 territory hexes on the World Map. When you arrive in Slough Creek, there is plenty of unclaimed territory, as indicated on the map by black (empty) hexes. The brighter the colored hexes, the stronger the rival pack claims. Unclaimed hexes are easier to claim than taking territory from rivals. 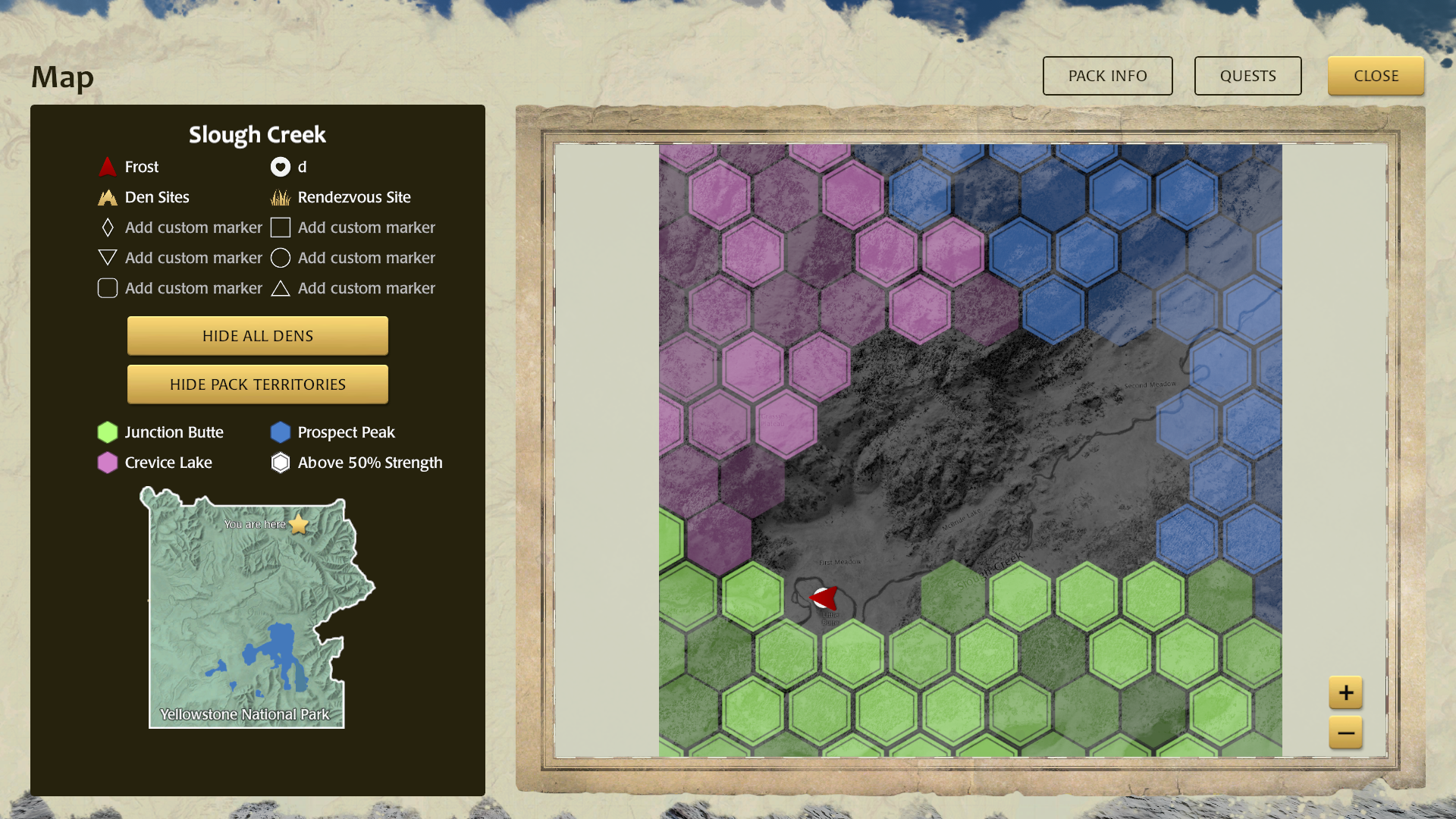 As you explore, you can keep track of the hexagon on top of the compass to know whose territory you are in. Black (empty) means no one has claimed this spot. Other colors are keyed to pack territories shown on the World Map. 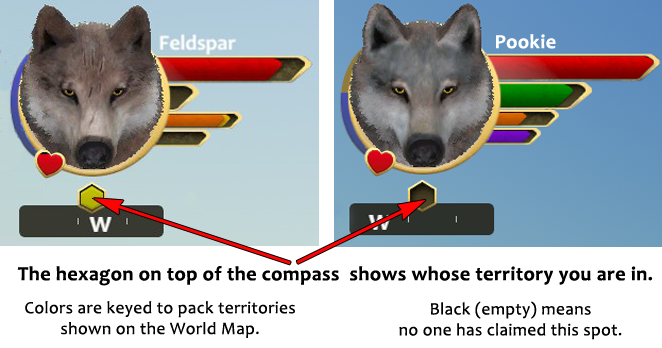 To claim an unclaimed hex as your territory, create a scent post by marking (urinating on) the same spot twice with the 'P' key. This will give you 50% territory strength in that hex. Return after 24 hours to reinforce this scent marking and make it a scent post. 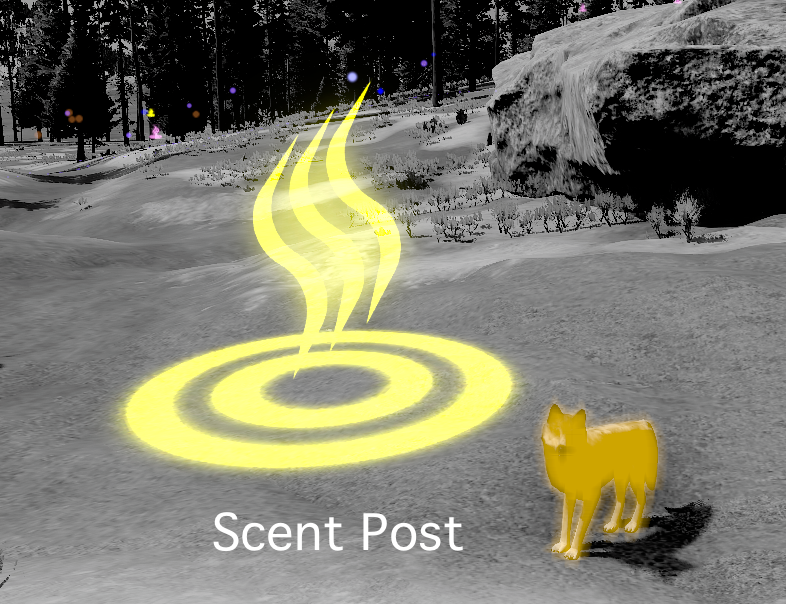 Scent posts are established territory markers – so powerful that you only need one in each territory hex. They will appear on your compass when you are in their hex, so you can easily find each one during your patrols, so you can mark it again.

Place your scent posts strategically to minimize travel time between them. Rather than centering your scent posts, consider placing them in clusters on the edges of the territory hexes so you can maintain them efficiently.

If you want to move a scent post, just make a new scent post and it will replace the previous one. This is handy if you want them placed more strategically within your territory hexes for easier maintenance.

Howl, Hunt, Fight, or Hang Out

You can also howl to increase your strength in a hex. Each howl increases your territory strength by 10%.

Hunting in a hex, winning a fight, and just being there also increases your claim on a territory.

To take over a stranger wolf pack's territory, find their Scent Post in a hex. Mark it to reduce their claim by 50%. Then establish your claim by marking around the hex, hunting, and fighting the pack if they find you there.

Maintain a Strong (but not too Strong) Territory

Your territory claims fade with time, so you have to spend time on patrol, marking and howling. You must maintain it even when your pups seem to require all your time and attention.

When taking territory from strangers, do it in small bursts. The more time you spend in stranger territory, the more likely it is that they will find you.

Spending time in a hex increases its strength. Plan your hunting trips so you can mark those hexes along the way.

After establishing the initial strength of 50% to establish territory, try to keep your territory hex strength above 30% to deter stranger wolf attacks but don't expend all your energy trying maintain really high territory strength (or you won't have any time to hunt and play with your pups).

The other requirement of the Establish Territory quest is to find at least four possible den sites. Slough Creek is vast, with over two dozen possible dens to discover under rocks, at the base of trees, or in abandoned burrows. When exploring Slough Creek, you may encounter den sites along the way.

You only need to find four potential dens to complete the Establish Territory quest. You will have time to find more in the Find a Den quest.

There are three ways to find dens:

Shortcut option: After establishing territory, a button "Reveal Dens" will be added to the quest in the Quests Panel.

The first time you come near a possible den site, a "Nearby Den!" notification will appear, along with a den icon below the compass.

When you see this notification, you can begin searching the immediate area for the den itself.

The den icon below your wolf badge will grow brighten as you get closer to the den. 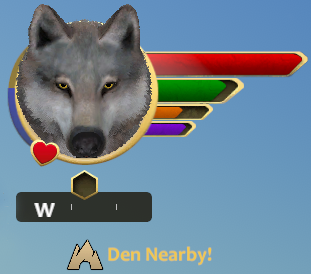 Search the vicinity looking for snow/dirt mounds and promising nooks under tree roots or rock crevasses.

Use scent view. Dens emit scents (floating den icon) which float downwind like other scents, so you can track these back to the source to find the den.

Find more dens along the way. When claiming your territory, don't ignore possible den sites when they appear. Keep a close eye on the icon that will notify you when a den is nearby, and don't be afraid to take a few minutes to scout around looking for one.

Once you find the den, you will be notified and it will be added to your map for later reference and use. Later, in the Find a Den quest, you will be able to choose your den. 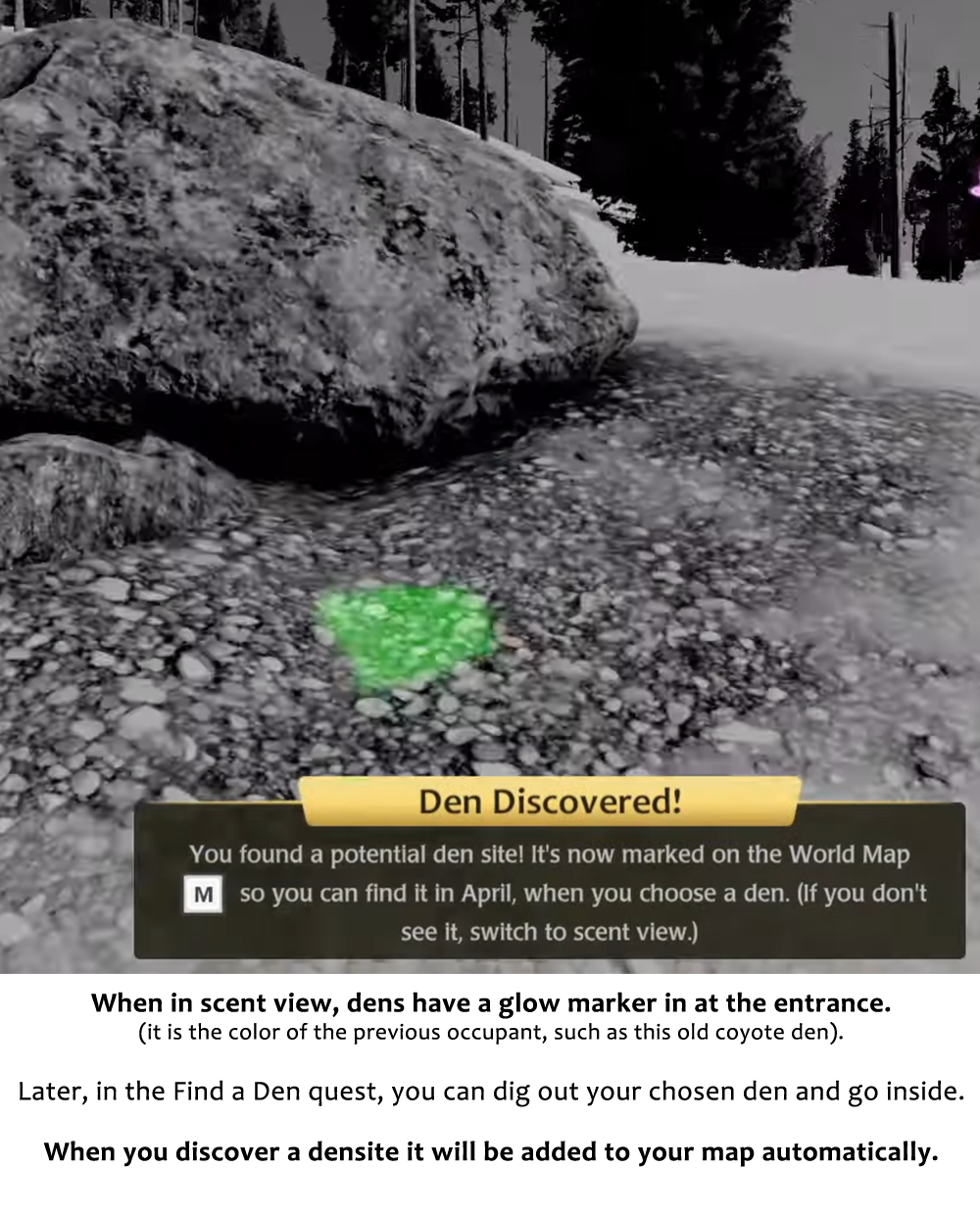 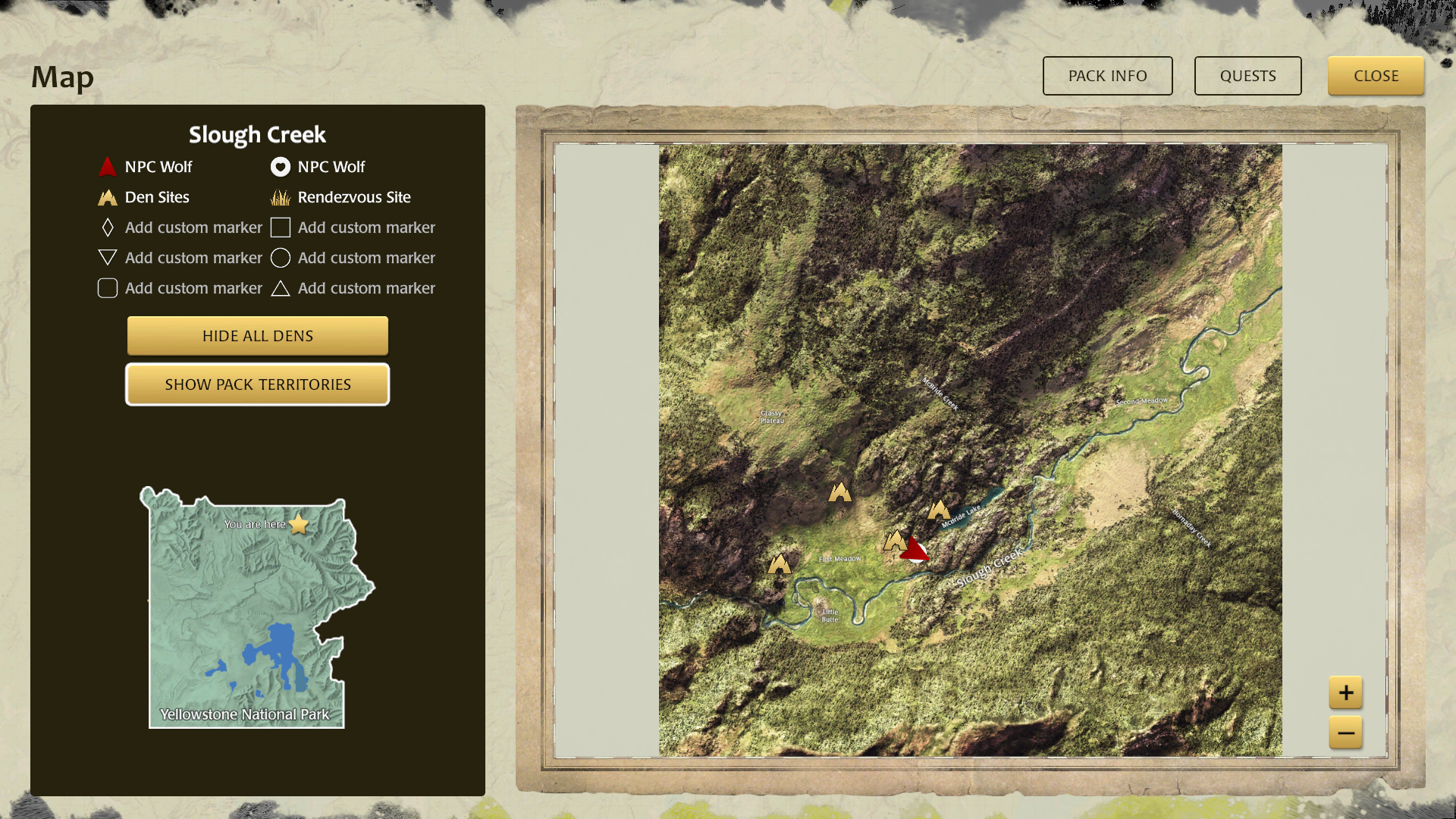 Once you have reached the requirement for 15 territory hexes above 50%, you will have an option to reveal dens, if you are having trouble locating them. On the Quest Panel, look for the button Reveal "X" Dens and they will be shown on your map and compass.

Once you've found at least four possible den sites, and have proven that you can keep your territory strong, you'll be ready to select a den at which to raise your pups.