Purchase this DLC and you can create a wolf with even more character! Cosmetic injuries and oddities based on real-life wolf conditions. Plus ten new wolf coats (five grays and five blacks) inspired by Yellowstone wolves. You can preview them in-game.

NOTE: These coats and body modifications will also be eligible to appear on dispersal wolves and grown pups in any new game that you start after you make the purchase.

NOTE: You purchase the DLC from either Steam or itch.io, depending where you purchased the game. If you purchased it on WolfQuest.org or itch.io, and then purchase the DLC on itch.io but later use the Steam key to get the game on Steam, the game will recognize your DLC purchase. However, if you have both versions and buy the game on Steam, the itch.io version will not recognize your Steam purchase.

NOTE: These customizations are cosmetic and do not affect your wolf's performance, unlike injuries sustained in the game. You can pause your story and add, modify, or remove them, as you like.

Rival wolf got your tail? Choose this customization. You can still wag just fine. 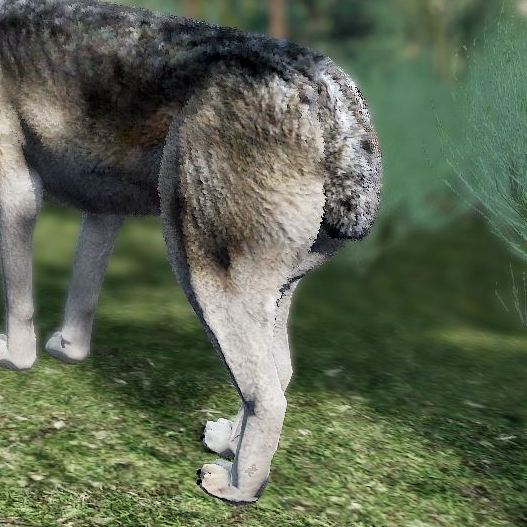 Born a little shorted in the tail department? Looks like a cut off tail (see above) but has regular fur coloring all the way down including the dark tail tip (if your wolf coat has that coloration). 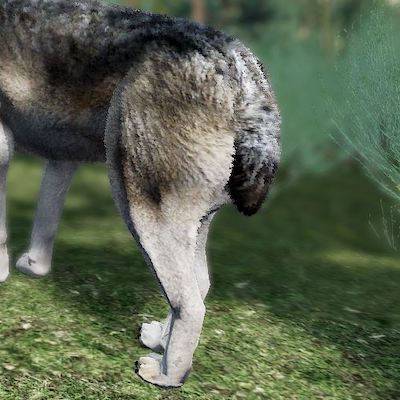 This customization was inspired by the Shoepack Lake Pack in Northern Minnesota as documented by the Voyageurs Wolf Project. Lots of Shoepack wolves just have short tails, for some reason.

An old injury or a deformity, a bent tail works as well as a straight tail. Bend up, to the right, or to the left... add some flair to all your emotes. 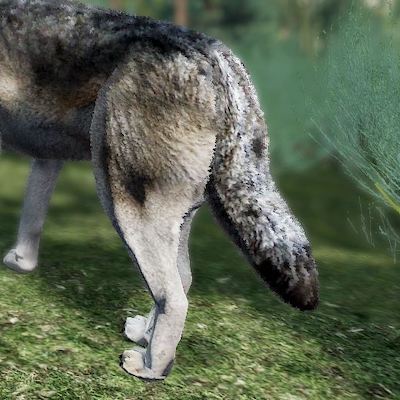 Met the pointy end of a mule deer? Did a beaver object to being dinner? Your wolf can now sport a missing, closed eye. Sorry, eye patch not available. 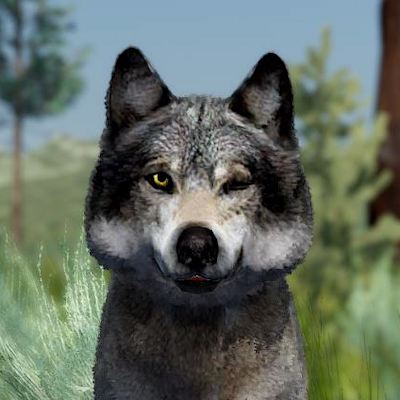 Took a sharp stick to the eye? Suffering from an eye condition like glaucoma, blastomycosis, or maybe an ulcer? A bulging, cloudy eye is proof that nature can be cruel. Probably quite painful and doesn't help your good looks -- but you'll survive.

Everyone who kept asking for blue-eyed adult wolves, here's one for you... 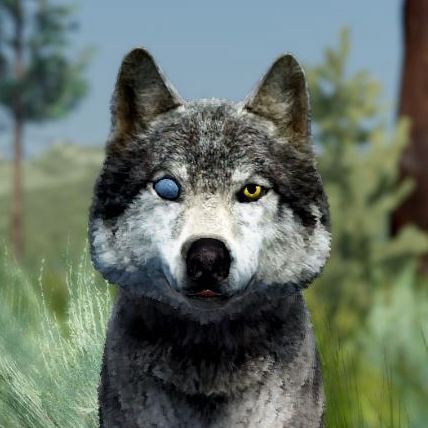 We know this one looks pretty weird. It caught our eye when the Voyageurs Wolf Project documented a wolf with corneal edema in Minnesota. This condition is obviously very rare in real life (so maybe save it for special occasions). 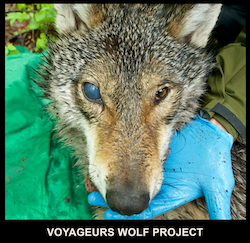 Give your wolf a winning snaggletooth grin. You can still wolf down your food and it does make you look tougher. 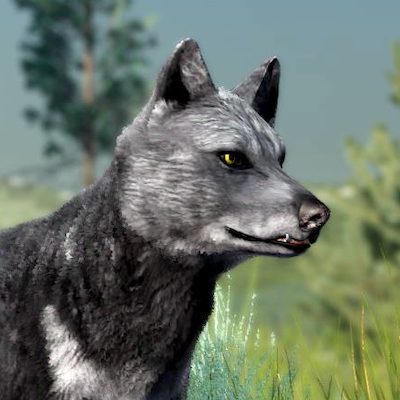 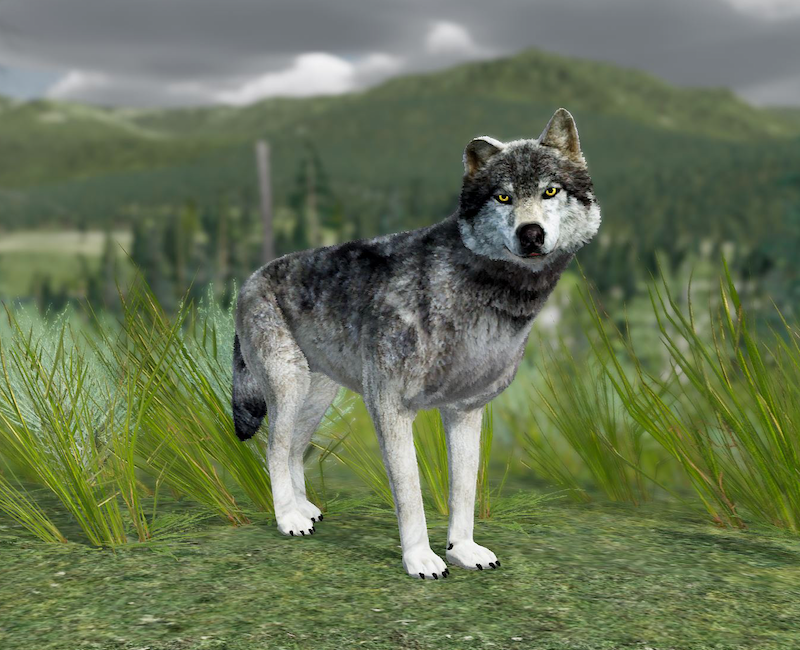 925M "Big Gray" was born into the Pahaska pack outside Yellowstone National Park. He was a handsome gray wolf a slightly droopy ear. When he joined up with 926F "Spitfire" and Middle Gray, he became the alpha male of the Lamar Canyon pack. The sisters had been on their own after the death of their mother 832F ’06 and the subsequent dispersal of their father 755M. When Big Gray came courting, he initially paired with Middle Gray. They had least two pups in 2013 but those didn't survive and Middle Gray left the group, leaving Big Gray and 926F "Spitfire" to become the new Lamar Canyon breeding pair.

In 2014, this pair had seven pups, with six surviving that first year. Sadly, when the pack went hunting in rival territory, they were surprised by the Prospect Peak pack. Big Gray fought bravely, which allowed his pregnant mate and their six yearling pups to escape. He died of his wounds on March 8, 2015. Thanks to his bravery, his family made their way home alive.

However, Spitfire's situation was dire with all those mouths to feed, a new litter on the way, and no experienced adults left in the pack to hunt or fight. So, when four of those same  Prospect Peak males showed up in in her territory, 926F first stood her ground but then quickly turned on the charm. She won them over, taking 992M "Twin" as her new mate, and the Lamar Canyon pack survived with the addition of four big, experienced males (including 956M) to help hunt and protect.

NOTE: 992M "Twin" and his Prospect Peak packmate 965M are both included in this DLC (see below). 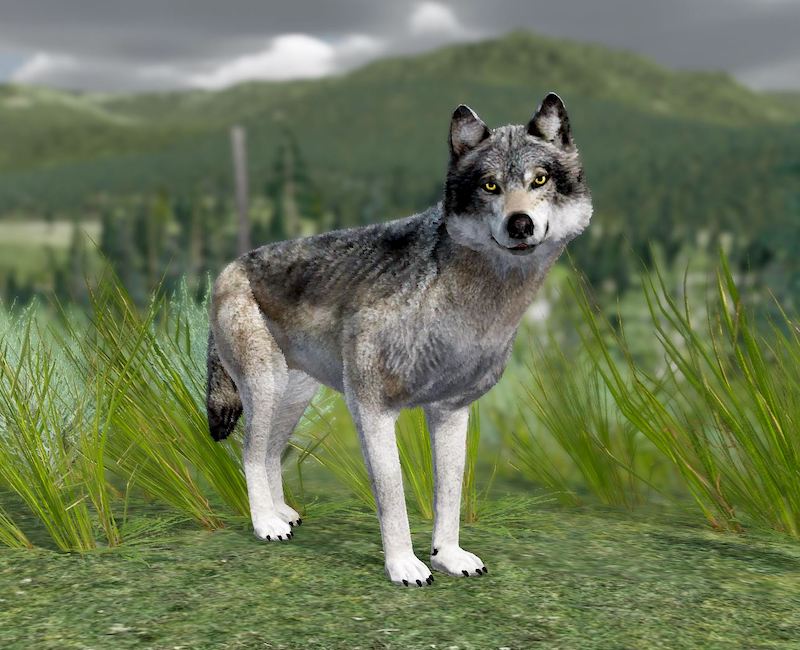 870F was born in 2011 into Mollie's pack – 486F and 495M's last litter. She had a handsome, classic gray and tan coat. As a yearling, she dispersed with sisters to join the Junction Butte pack.

870F and her older sister Ragged-Tail did not get along. They jockeyed for power and for the attentions of 911M "Puff" (nicknamed for his shorter, puffy tail), alternating as alpha female. At one point, 870F suffered a neck or back injury. That made it hard for her to keep up and Ragged-Tail took over the pack again. Then, in the autumn of 2013, both Ragged-Tail and Puff disappeared and thus 870F regained her status, eventually taking 890M "Patch" as her new mate. They had five pups in 2014 and maintained a strong territory together.

Peace was short-lived, once again, as 870F's sister 970F drove her out of the pack and into the life of a lone wolf. Without the support of a pack, 870F was again injured, probably while feeding on a carcass. Unable to care for herself, she died of malnutrition in March of 2015. 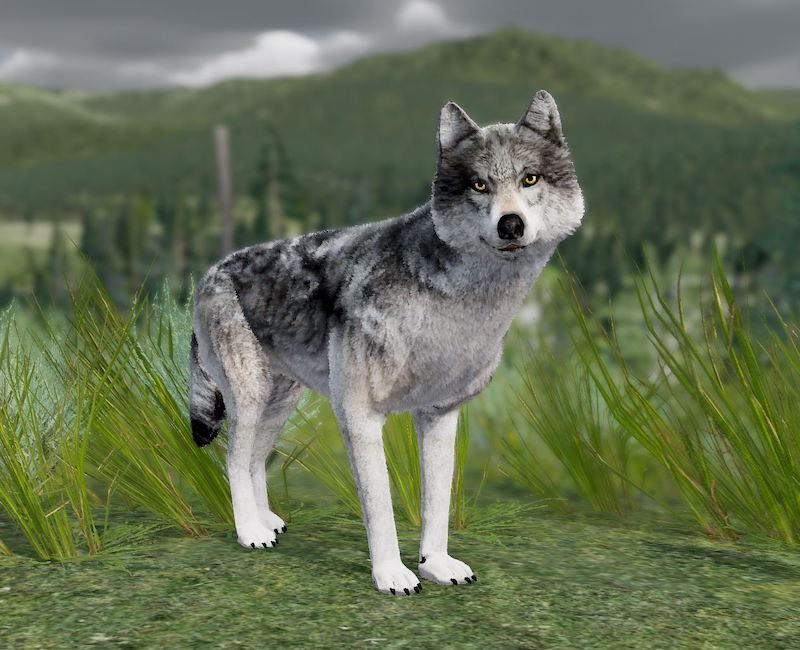 715F was born in 2007 into the Agate Creek pack. She had a silvery gray coat. Her father 383M was the pack's alpha male until 2009 when 838M "Big Blaze" usurped him. The next year, dispersers from Mollie’s pack (641M and 586M) arrived in Agate territory and ousted Big Blaze after an intense battle. The new alpha was now 641M. Both 715F and her mother 472F (the Agate's alpha female) bred with him and the pack added four more pups. The next winter, rival wolves killed 472F and so 715F took her mother's place, becoming the second alpha female of the Agates. It was a time of fierce competition between the Agate Creek, Mollie’s, Lamar Canyon and Blacktail packs and many wolves lost their lives. 715F was killed by rivals in November of 2011. Her older sister 471F became the third Agate alpha female but was herself killed by invading Mollie's wolves in the winter of 2012. And that was the last of the Agate Creek pack. 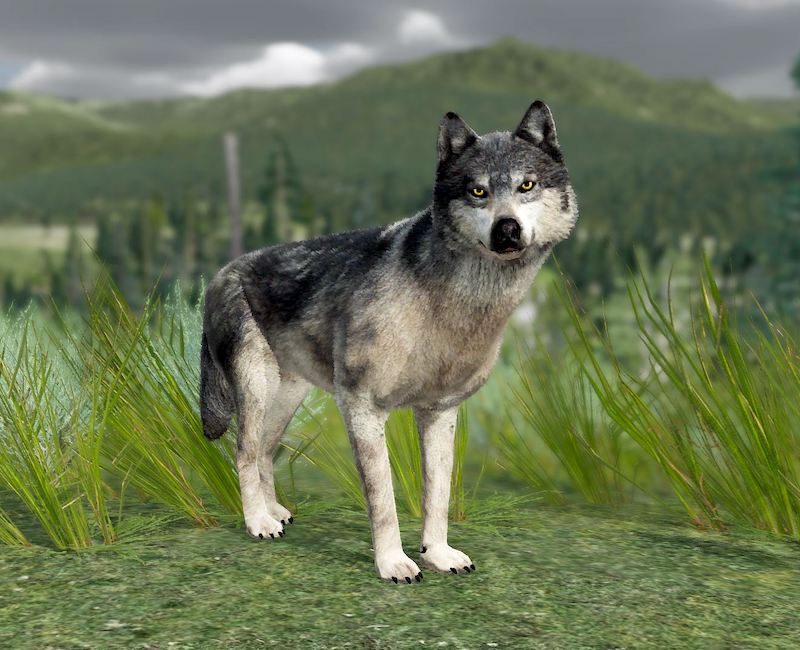 965M was a classic gray wolf who was so good looking that Rick McIntyre was said to have dubbed him “the Brad Pitt of wolves." He was thought to have been born into the 8-Mile pack but his birth year is unknown. He was collared with the Prospect Peak pack in 2014. 965M was one of the Prospect Peak males involved in the drama between the Prospect Peak and the Lamar Canyon packs which resulted in Spitfire inviting him and his packmates to join her (Spitfire took his packmate Twin as her mate). He was a wanderer, spending time between the Prospects and the Lamar Canyon pack. In 2016, 965M left the safety of Yellowstone National Park and was killed during the wolf hunting season in Montana. 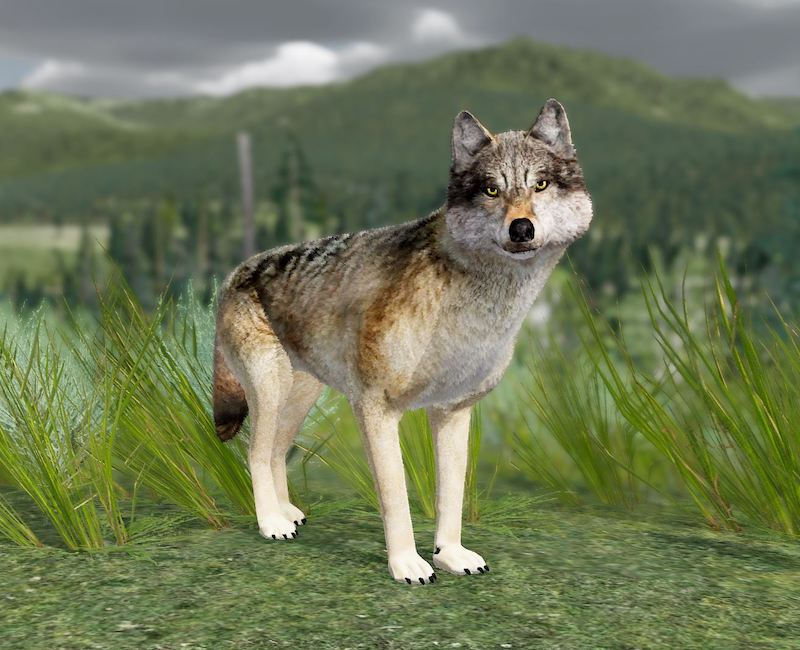 1091F "Mouse" was nicknamed for her love of mousing. She had a lovely buffy tawny coat with black highlights on her saddle. She was born in 2015 to the newly forged Wapiti Lake pack in Yellowstone's Hayden Valley, part of the first litter of the Wapiti alpha female and the famous male 755M. (He had been the alpha male of the Lamar Canyon pack until his mate 832F '06 died and he had to disperse to find an unrelated female for a new mate).

In 2016, another litter was born – four more siblings for Mouse. However, the Wapiti Lake pack's peace was short-lived as three Mollie's Pack males intruded and drove out the elderly father 755M. Soon after, 1015M became the new Wapiti Lake alpha. In 2017,  both her mother and Mouse had litters of pups with this new alpha male, making the Wapiti Lake the biggest pack in the park that year. 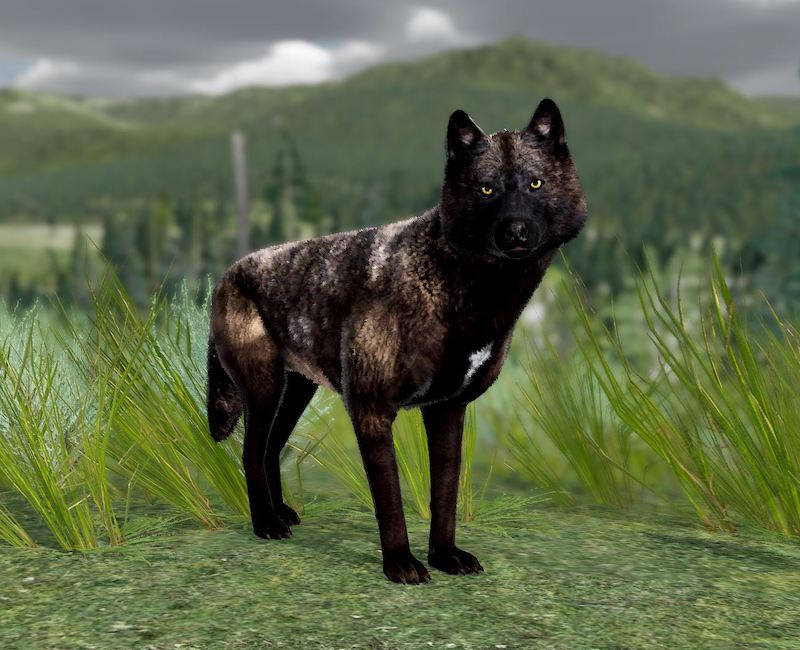 Little-T was a black female named for the small white tornado (or some say a lowercase letter "t") on her chest. She was born in 2014 into the Lamar Canyon pack to 926F "Spitfire" and 925M. She was a part of their dramatic story also involving 992M Twin (see above).

The years that followed were not easy for Little-T or her mom 926F, who also lost her second mate, 992M Twin. Their pack suffered mange and canine distemper and pressure from rival packs. They joined up with Beartooth males 949Mb and Small Dot but the Lamar Canyon pack was then one of the smallest packs in the park. After 926F died in 2018, Little-T and Small Dot moved their little pack out of Yellowstone National Park in 2020. Their all-black pack may still be roaming the rugged mountains outside the park. 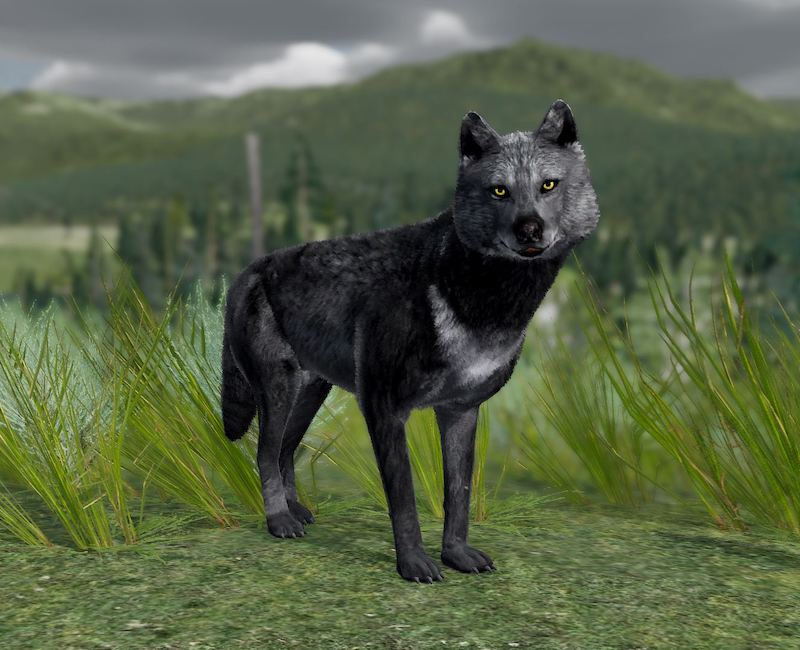 427F was nicknamed U-Black for the distinctive u-shaped white mark on her chest. She born in 2001 into the Druid Peak pack. Her parents were 42F and 21M (making her an older sister of 350M, see below). In 2004, U-Black dispersed from the Druid pack to form the Specimen Ridge pack with 194M of the Mollie’s pack and an unknown gray-colored male. On the slopes of Specimen Ridge, they had five pups, with two surviving to the end of the year. Sadly, she lost her mate 194M that autumn. U-Black was last seen in early 2005 traveling with her two pups and an unknown gray male adult. Nothing is known after that. 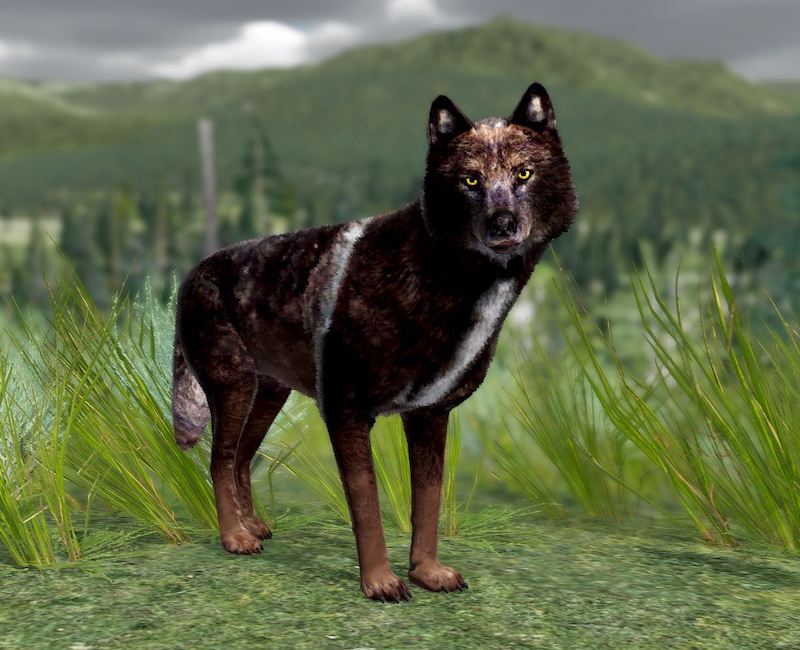 350M sported a beautiful white stripe down his ebony chest. He was born in 2003 to Druid Peak alphas 42F and 21M (making him a younger brother of U-Black, see above). The next year, his mother was killed by rival wolves and his father died of natural causes. Without the Druid alpha pair, Leopold pack males started spending time in the Druid’s territory and they eventually took over the Druids, ousting 350M and several pack mates. No one knows what happened to him after that. 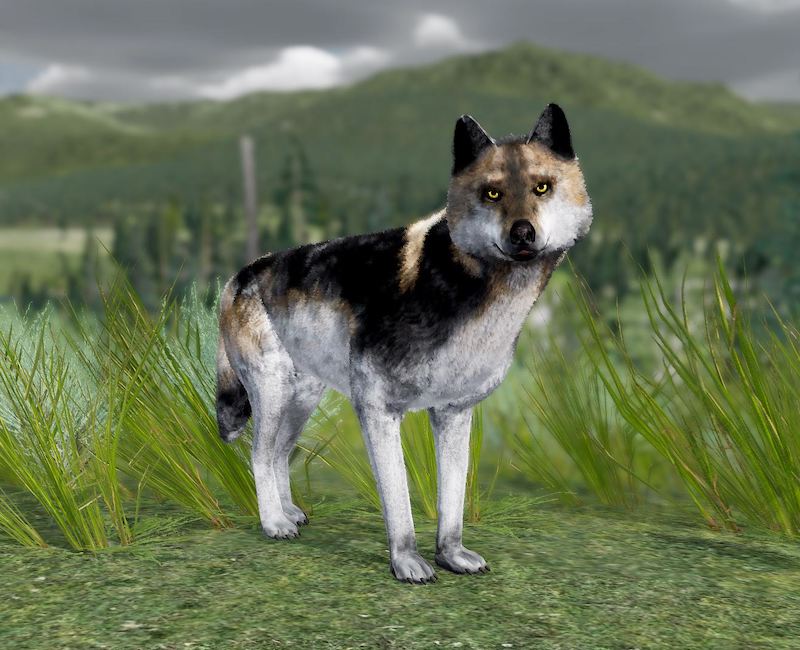 992M "Twin" was born in 2009 into the 8-Mile pack. He was collared when he was almost six years old and a member of the Prospect Peak pack. In 2015, the Prospects encountered the Lamar Canyon pack. The Lamar alpha male 925M "Big Gray" fought valiantly, allowing his pack to escape. Soon after, Twin and three of his Prospect Peak companions then entered Lamar's territory and cornered the pregnant Lamar alpha female 926F "Spitfire" and her six yearling pups (including Little-T, also included in this DLC). The Lamars were faced with disaster. Amazingly, the quick-thinking Spitfire approached the four male enemies in a friendly manner, wagging her tail playfully. She won over Twin and his three male pack mates, thus adding four experienced, strong hunters and fighters to her pack. Twin became the new, devoted Lamar alpha, raising Spitfire's soon-to-be born pups as his own. Twin's radio collar stopped working so his fate is unknown. He was last spotted in 2016 chasing spring calves in the Lamar Valley. 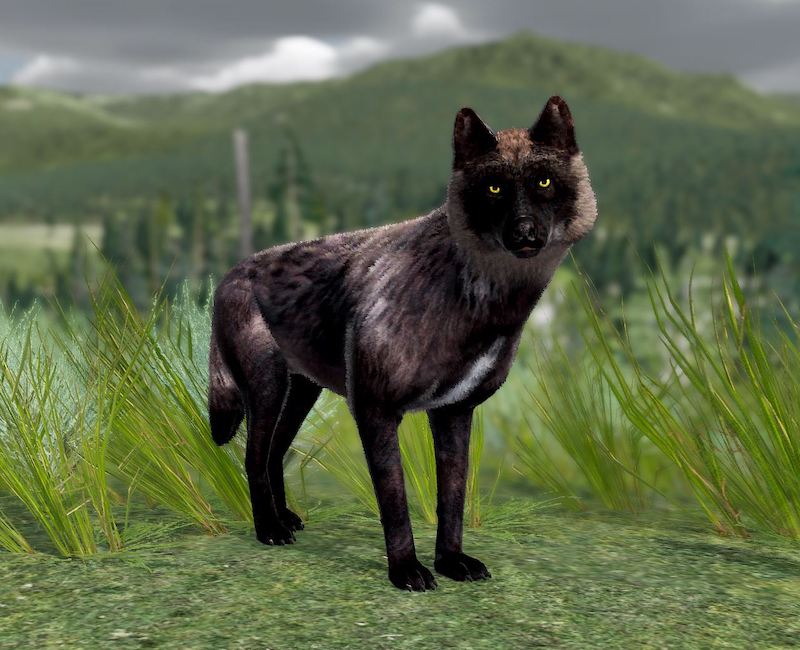 1276F is one of the Junction Butte beauties that sport bronze highlights contrasting with jet black faces. She also had a white blaze, low on her chest. She was born in 2018 to a pack that was well on its way to becoming one of the largest and most dominant packs in the park. She was nicknamed "Third Mother" in 2020 when she and two other females had a total of 18 pups. The three mothers all denned in Slough Creek and, impressively, all 18 thrived and survived their first year!

With those pups, plus 17 adults, the Junction Butte pack size is surpassed only by the famous 37-strong Druid Peak pack from 2001. Eventually a pack this large might well splinter into smaller packs. However, being large and in charge has its advantages in Yellowstone, making it easier to hold and expand territory and take down big meals like bison. Third Mother was radio-collared in December of 2020 (thus becoming 1276F) and is still alive and well, as of 2022.