Select "New Game" from the Main Menu, and choose the Mode "Create Multiplayer". This will bring up a list of options for your game: 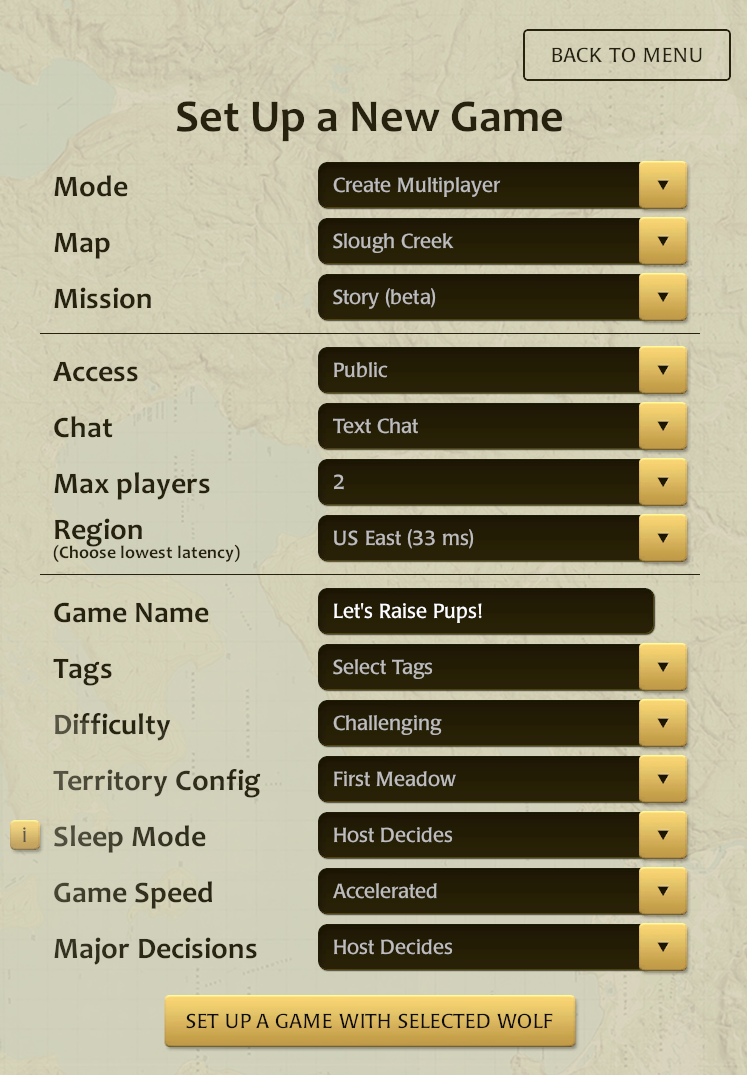 There are currently three multiplayer maps in WolfQuest: Anniversary edition. The main maps are

Here you can control who can join your game. The options are:

This controls what kind of chat is available in your game. Currently you can choose between Text Chat and No Chat, though Phrase Chat is planned in the future.

Here you can control the maximum number of players in your game. You may choose any number between 2 and 8 players in Pack Life and Territory Acquisition mods. Slough Creek's Story mode (raising pups) has smaller packs, with 2-5 players.

Note that higher player numbers may have larger performance impacts on the host.

Here you can select different multiplayer regions to play in. In most cases, you will want to select the region with the lowest latency (ms).

Latency is the time it takes for information to go between you and the server. High latency affects the game in many negative ways. With high latency, you may notice other players stuttering or skipping around much more, as well as other animals may appear to be behave more erratically.

Here you set what your game will be called in the Lobby. This name must follow all of the WolfQuest Multiplayer Rules. Consult Mate and Date Game-Names for examples of inappropriate game names.

Choose from tags to describe your game and help players find games with compatible playing styles and goals.

Here you can set the starting difficulty of the game: Easy, Challenging, or Accurate. You can still change this in-game in the options menu.

Amethyst and Slough Creek Only

When creating a multiplayer game on Amethyst or Slough Creek maps, the host can choose from four territory configurations. These establish the initial pack territories, so you can choose a larger or smaller unclaimed area, depending on what kind of game you seek.

Choose Host Decides (when the host sleeps, all other players must sleep then as well) or Fixed Sleep Schedule (All wolves must sleep at fixed times of day.)

In Slough Creek Story mode, the host can choose from two time speeds:

In Slough Creek Story mode, there are two ways that decisions are made, and the host chooses one when creating the game:

Once you've customized all of these settings to your satisfaction, hit "Set Up Game With Selected Wolf" and host your game!

The host's Pack Info panel has a button to make the game private. This hides the game in the MP lobby except for those who are in the game when the host clicks that button.

In private games, host's Pack Info panel has a button to add other friends to the game, so it will be listed for them in the lobby.

The game host can kick players out of a game if they are breaking rules and being extremely uncooperative or obnoxious. Kicking from multiplayer games is meant to keep games fun and prevent troublesome players from ruining the gameplay.

Hosts should not use kicking in public games to save spots for friends. Play a private game if you want to play with specific people. If a host kicks excessively, they may hear from WolfQuest admin.

WolfQuest multiplayer games are not monitored or moderated live. We strongly encourage all players to use the in-game reporting system to help keep WolfQuest a pleasant online community.