Based on actual wolves of Yellowstone National Park and the International Wolf Center.
Updated on January 29, 2022

Players can choose from more than 25 coat textures, modifiable with tints. Plus there are "Life is Rough" options for the Lamar Canyon Pack and Blacktail Deer Plateau Pack coats, modified to display injuries, scars, and afflictions. Fifteen additional "Yellowstone Wolf Coats" are available as DLC.

Players can also select from a range of realistic eye colors, modify size/body shape, and choose from various ear issues, or add a radio collar. Learn more about Wolf Customization.

Five coats based on wolves from the Lamar Canyon Pack (https://www.yellowstonewolf.org)

Five coats based on wolves from the Blacktail Deer Plateau Pack (https://www.yellowstonewolf.org)

Five classic coats from the original WolfQuest. Just as they were so you can get your nostalgia on.

Since the beginning of WolfQuest, the International Wolf Center has been one of our science advisors, providing us with essential wolf behavior information that we've incorporated into all aspects of the game. We honor this connection with five wolf coats, inspired by a few of their beloved wolf ambassadors, past and present. 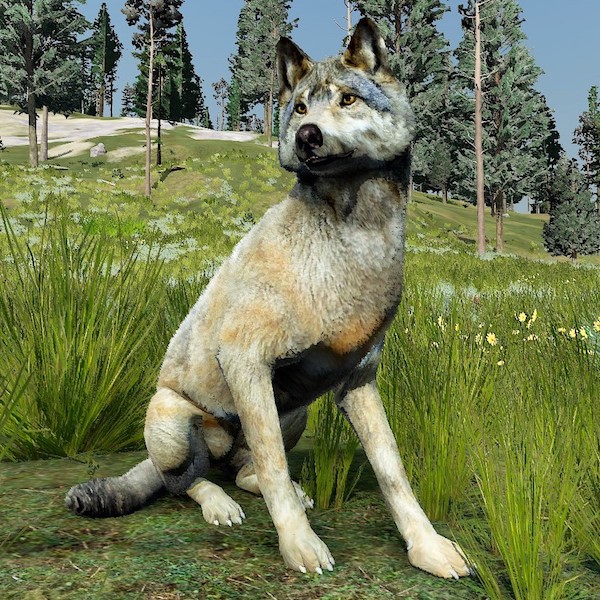 Aidan was representative of the northwestern subspecies of the gray wolf, (Canis lupus occidentalis) Aidan and his brother Denali (still living) were born at the Wildlife Science Center in Forest Lake Minnesota on April 27th, 2008. As 12-day old pups, they were well socialized to the wolf care staff and that allowed us to experience one of the most incredible and complex individuals in our 30-year history of caring for ambassador wolves. Aidan’s demeanor was one of seriousness and intensity that provided an incredible strength in leadership of the Exhibit Pack from 2011 – 2018. “Regal” is one of the best words that best describes Aidan’s presence in the pack and to visitors. His pronounced “wolf-mask” face and the intensity of alert ears priced forward showed a wolf that was always tuned in to any potential threat to his pack. It was that alertness and protective nature that made adopted pups feel so secure in Aidan’s presence. 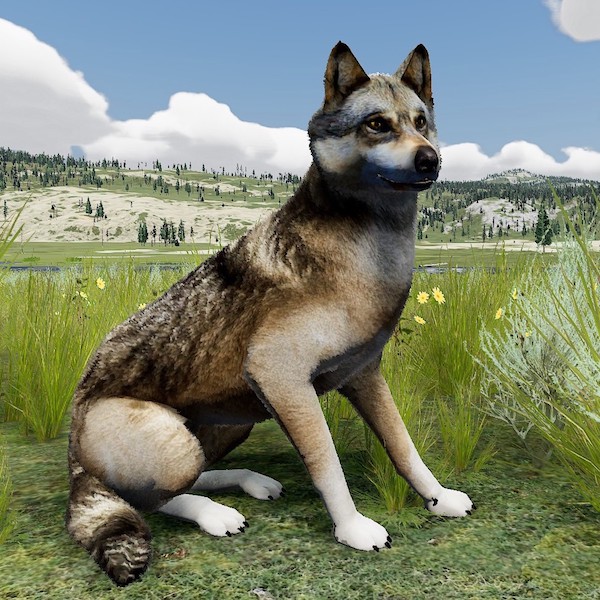 Boltz was a representative of the great plains subspecies of the gray wolf, (Canis lupus nubilus). Boltz was born in Sandstone, Minnesota in 2012 and while not a true littermate, was a pup mate to Luna. Knowing Luna’s tendency for dominance and food possession, Boltz developed a low-ranking status in the pack. In addition to lack of status, he developed a phobia about summertime insects, particularly wasps, hornets, and bees. When he heard something buzzing overhead, he would drop his head and retreat to the wooded portion of the enclosure. Boltz was a calm, social pack member that would wait and watch, before trusting a situation. His sandy-brown pelage blended well in the upper enclosure and his facial expressions of mistrust and caution made him a favorite of visitors that would comment on that classic wolf look. 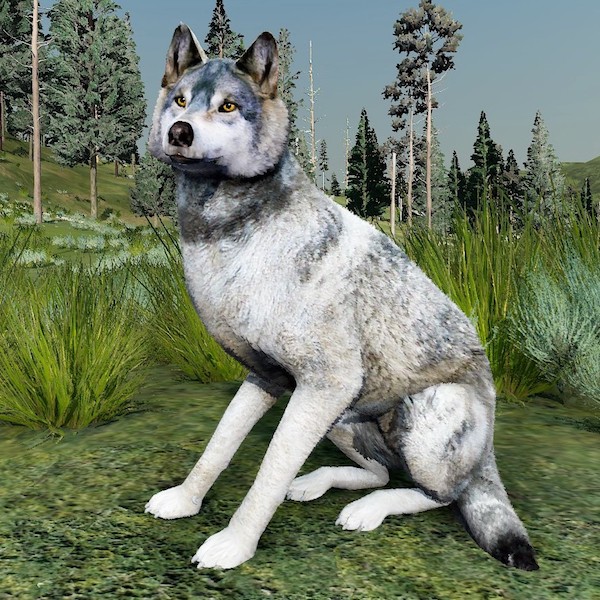 Grizzer was a large, gray-coated male representing the great plains subspecies of the gray wolf, (Canis lupus nubilus). He was born May 5, 2004 in Sandstone, Minnesota and lived to an impressive 17 years, surpassing the lifespan of all of the other ambassador wolves at the International Wolf Center. Grizzer’s pelage was the classic gray wolf that blends well in a rocky or forested backdrop. As he aged, he became a girzzled white-gray. He had a bold personality when it came to the other wolves but when pups joined the exhibit pack, he became patient and playful.  He is remembered for this tolerant, “go with the flow” personality. 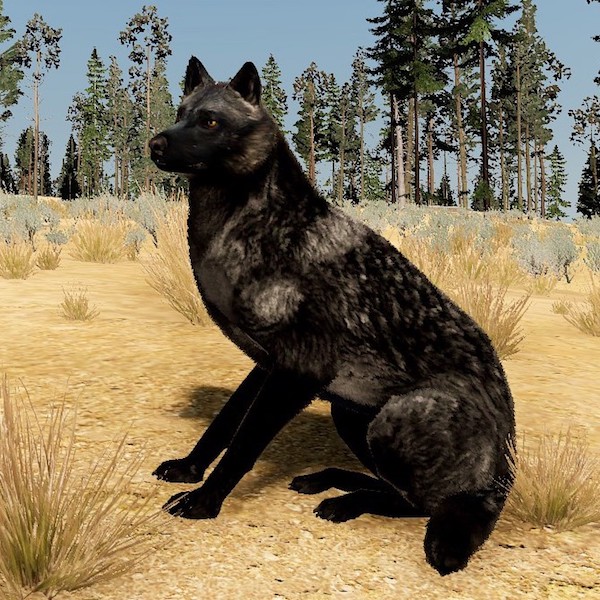 Luna was a black color-phased female representing the great plains subspecies of the gray wolf, (Canis lupus nubilus). Luna was born in Sandstone, Minnesota in 2012 and while not a true littermate, was a pup mate to Boltz. Despite her smaller physical presence and ongoing health issues, her attitude and perseverance were much greater than her body size. This determination made her capable of guarding food from her largest packmates, but it was no match for the unfortunate diagnosis of a spindle cell sarcoma that took her life in 2019. While her physical life was cut short, the behavioral legacy and memories she left behind are endless. 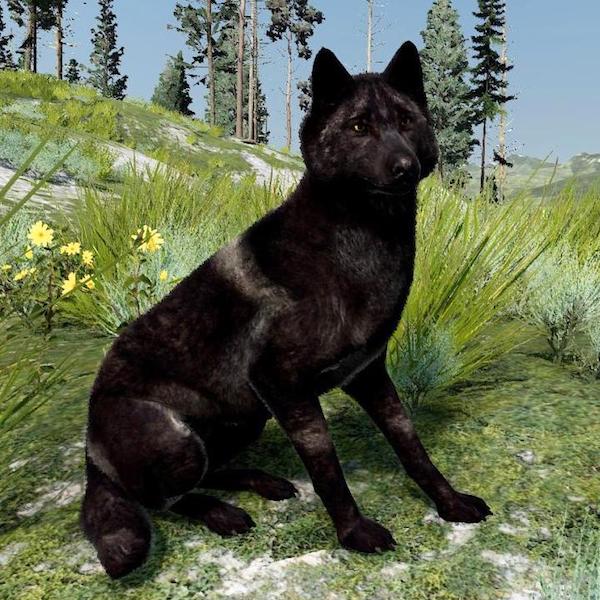 MacKenzie was noted for her striking black pelage. She was born on April 28, 1993 in South Dakota and represented the great plains subspecies of the gray wolf (Canis lupus nubilus). Some say leaders are born, not created and that is probably valid in MacKenzie’s case. As a young pup, while her littermates displayed a more relaxed tail wag, MacKenzie’s tail was held in the characteristic T1 posture, held high over her back. This is the sign of a dominant leader. Maybe it was the dark pelage, but when that tail went up, subordinates rolled over. MacKenzie was the dominant female in the Exhibit Pack for many years. Once she was dispersed into retirement, she maintained the dominant female status with the retired pack until she died in 2008. MacKenzie was a matriarch who taught us so much about wolf behavior, dignity, dominance status, and retirement.

Thank you to Lori Schmidt, IWC Wolf Curator, for her contributions to the ambassador wolf bios.

The International Wolf Center, located in Minnesota, United States, advances the survival of wolf populations by teaching about wolves, their relationship to wildlands and the human role in their future. The International Wolf Center maintains a live wolf exhibit, featuring their Exhibit Pack to enhance both in-person and online educational experiences. These ambassador wolves contribute to the Center’s mission by reinforcing our educational messages and by creating a connection with each one of their visitors.